Inherited diseases develop and progress according to some specific gene defect. Retinitis pigmentosa (RP) and related disorders are of this type. There are over 100 known genes that cause RP-like degenerations (visit RPB and NEI). The defective genes operate in various ways, but in general cause retinal photoreceptor cells to die, which leaves a blind retina behind. Such diseases are relatively rare, though 100s of thousands suffer from them.

Risk-associated diseases are far more common and include age-related macular degeneration (AMD), glaucoma and diabetes (visit NEI). Such diseases have strong genetic components where gene variations (not defective genes) interact with environmental risks (smoking, obesity) to cause damage to the retina indirectly, likely by immune-system attack on critical supporting cells of the eye. Millions suffer from these diseases.

Acquired diseases include trauma, infections and environmental poisons. These all damage the retina in various ways, but are usually irreversible.

And then some disorders like myopia and cataracts are a mixture of all three effects. Both of these disorders are largely treatable, but nevertheless cause significant personal and economic devastation in parts of the where medical care is de facto rationed by poverty. The action items here are social. The free market has never cured a disease, but impassioned science and medicine does (see ‘Second Suns‘ and ‘Duk County‘).

Of course that isn’t the end of the story. We hope to use genetic, molecular, cellular or even bionic tools to restore vision, but only very rare, specialized cases can be treated this way. However, a new challenge has emerged: retinal remodeling. Just as the brain pathologically “rewires” in neurologic disease, the retina “rewires” in retinal degenerations. Some remodeling events begin as soon as photoreceptor stress is initiated, while others are manifest only upon complete local photoreceptor loss. Remodeling negatively impacts all proposed treatments and in the Marc laboratory we focus on understanding and controlling retinal remodeling.

It is hard to truly mimic what these disease do to us, but here is a simple illustration.
Upper left: Normal. Upper right: myopia. Lower left: RP. Lower right: AMD. 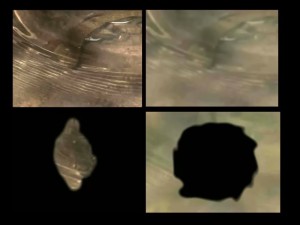