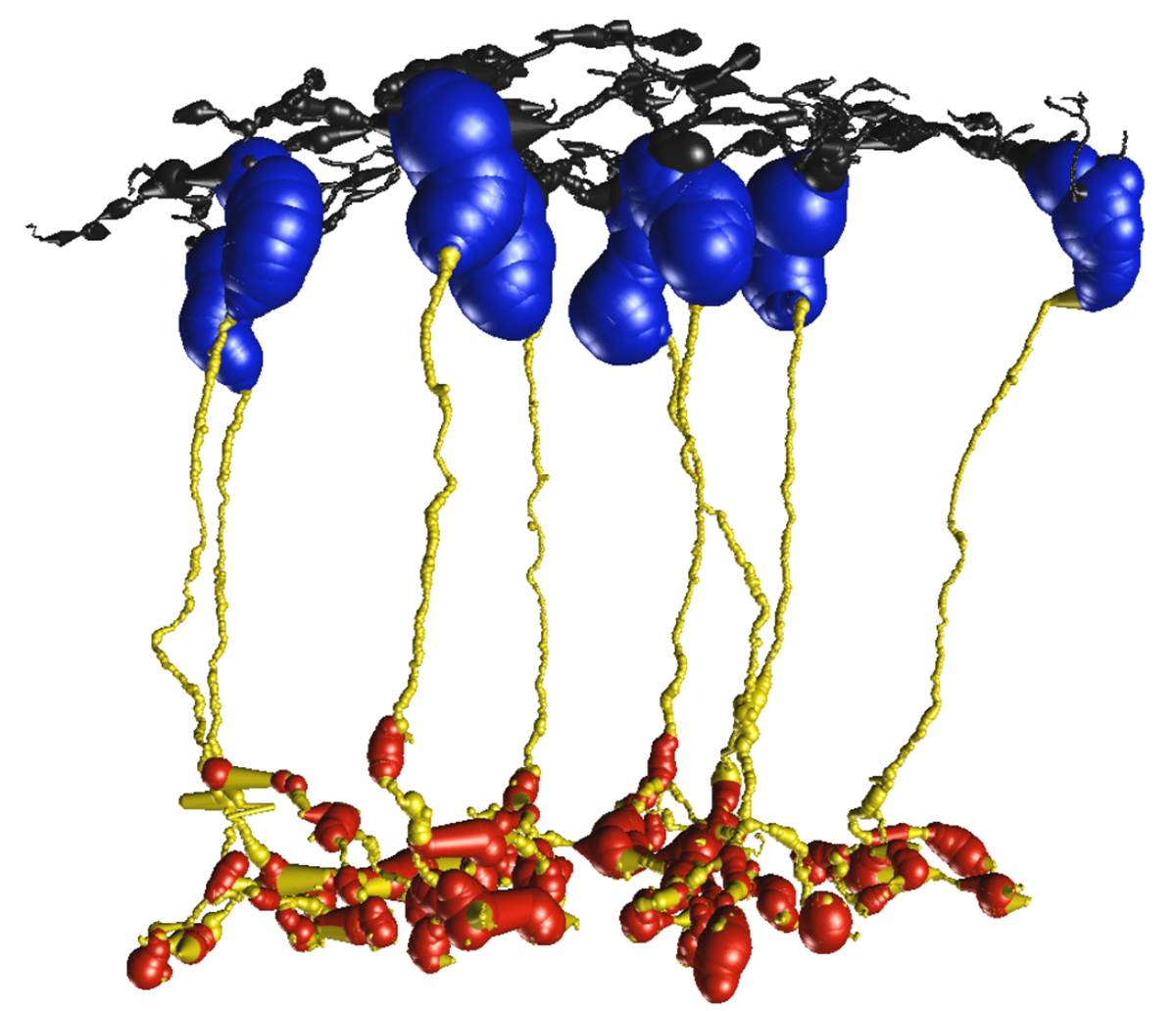 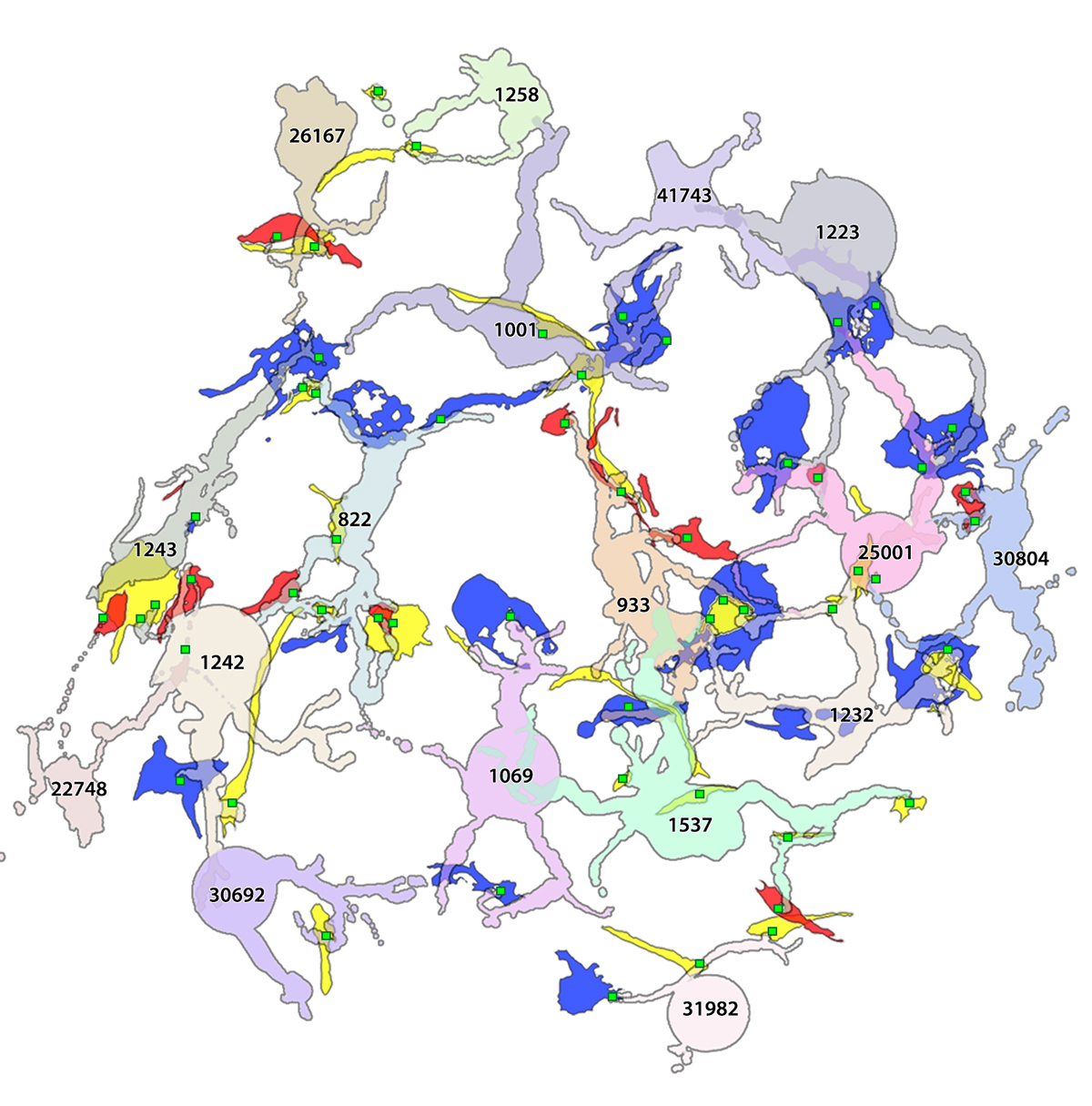 We have a new manuscript out in Experimental Eye Research, A pathoconnectome of early neurodegeneration: Network changes in retinal degeneration. (pdf here)

Abstract: Connectomics has demonstrated that synaptic networks and their topologies are precise and directly correlate with physiology and behavior. The next extension of connectomics is pathoconnectomics: to map neural network synaptology and circuit topologies corrupted by neurological disease in order to identify robust targets for therapeutics. In this report, we characterize a pathoconnectome of early retinal degeneration. This pathoconnectome was generated using serial section transmission electron microscopy to achieve an ultrastructural connectome with 2.18nm/px resolution for accurate identification of all chemical and gap junctional synapses. We observe aberrant connectivity in the rod-network pathway and novel synaptic connections deriving from neurite sprouting. These observations reveal principles of neuron responses to the loss of network components and can be extended to other neurodegenerative diseases. 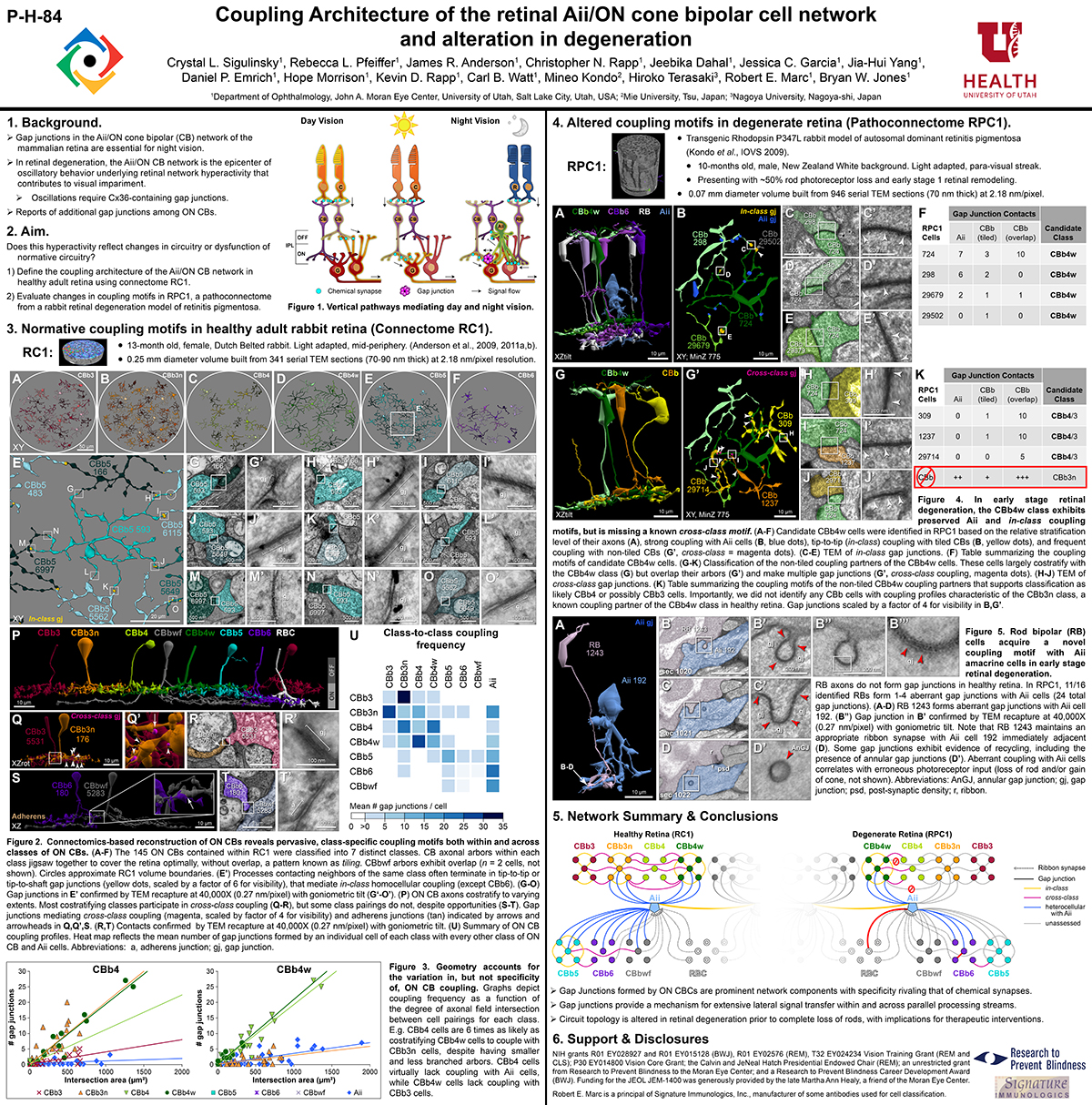 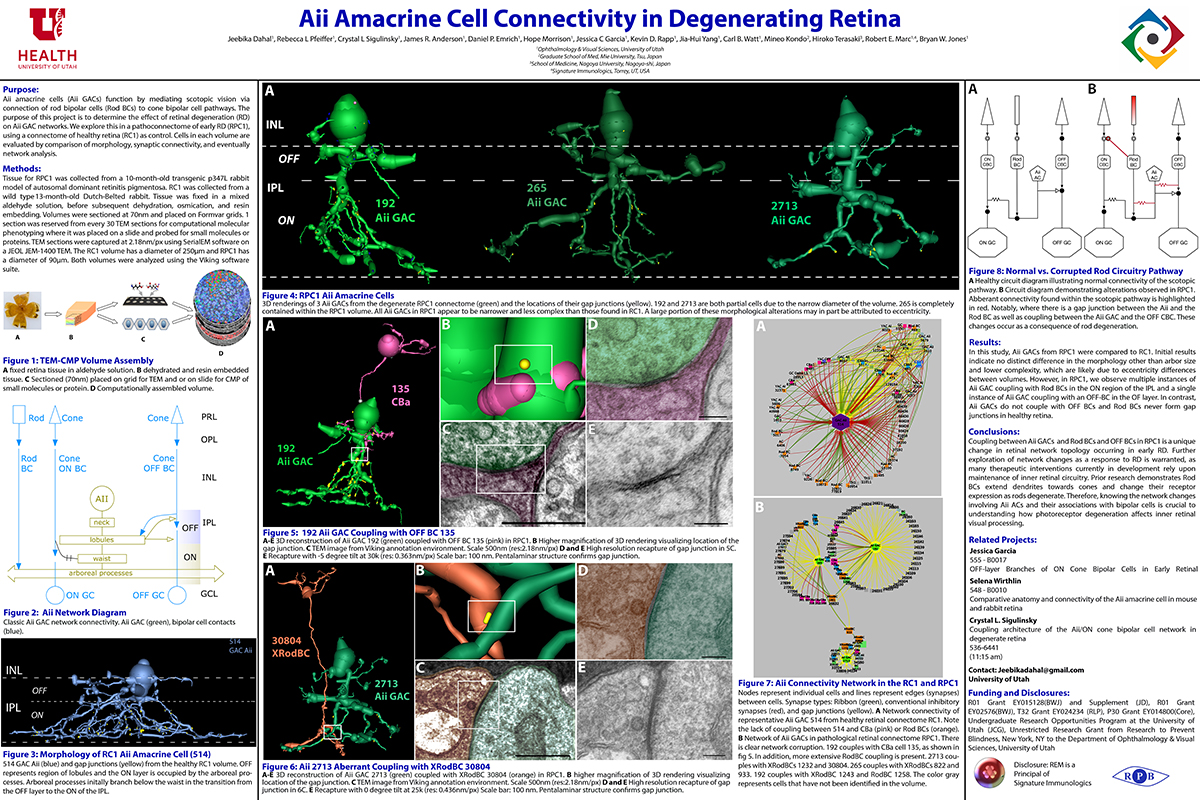 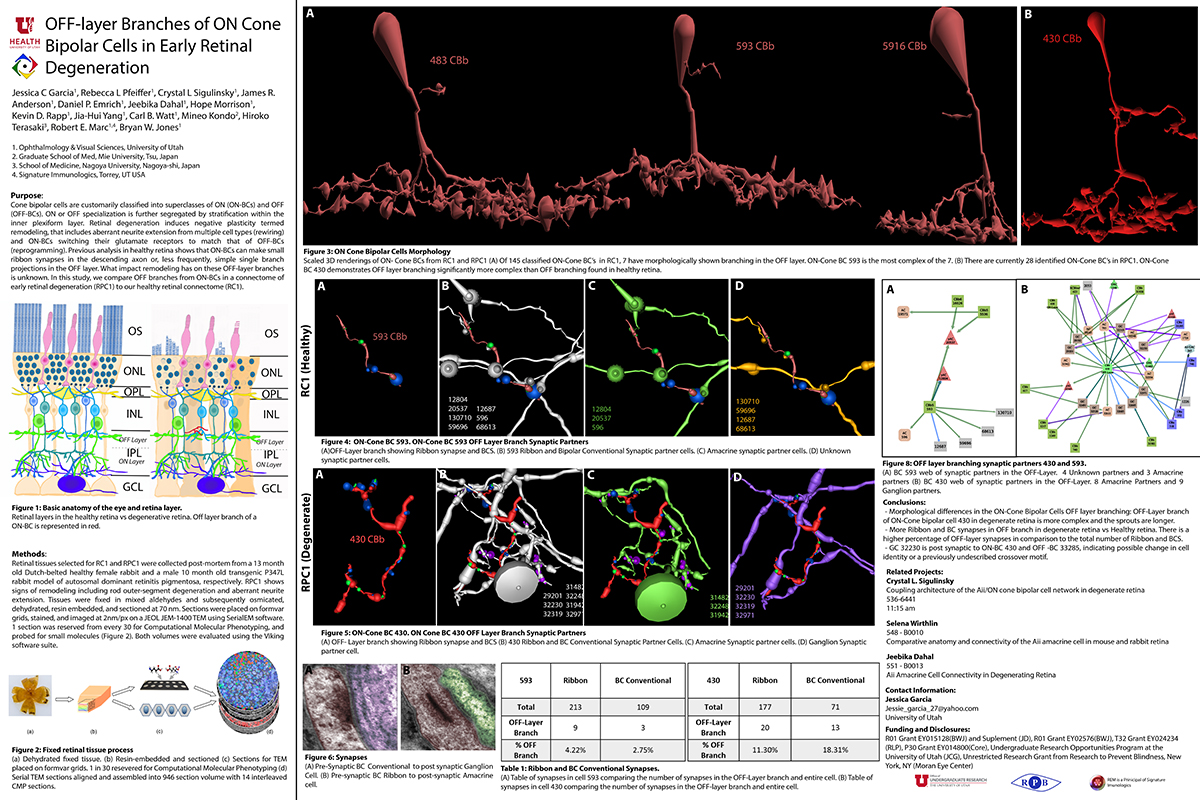 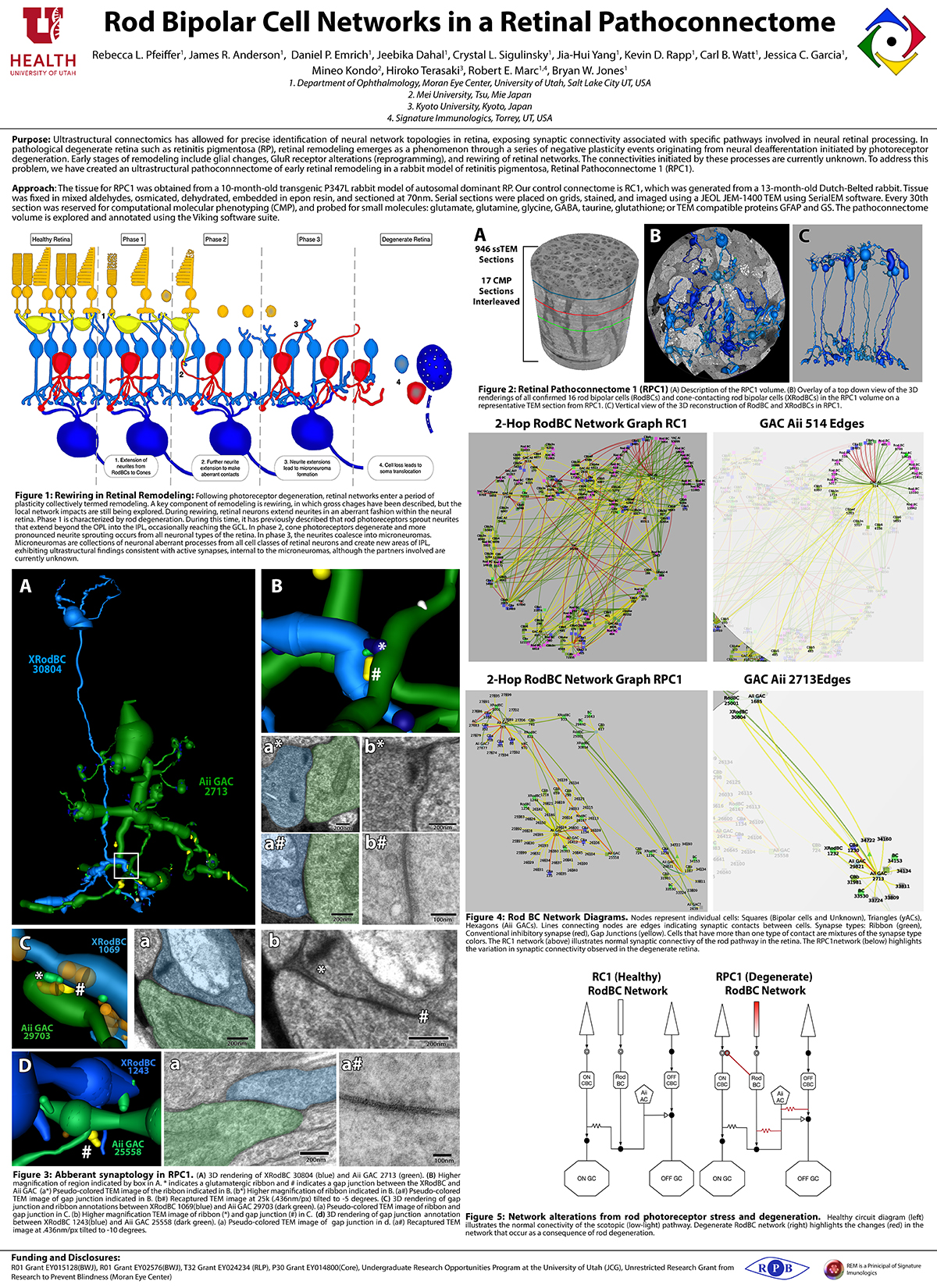 We presented a poster on Rod Bipolar Cell Networks In A Retinal Pathoconnectome at the 2019 HHMI Connectomics meeting in Berlin today. Downsampled PDF of poster here.

Abstract: Ultrastructural connectomics has allowed for precise identification of neural network topologies in retina, exposing synaptic connectivity associated with specific pathways involved in neural retinal processing. In pathological degenerate retina such as retinitis pigmentosa (RP), retinal remodeling emerges as a phenomenon through a series of negative plasticity events originating from neural deafferentation initiated by photoreceptor degeneration. Early stages of remodeling include glial changes, GluR receptor alterations (reprogramming), and rewiring of retinal networks. The connectivities initiated by these processes are currently unknown. To address this problem, we have created an ultrastructural pathoconnnectome of early retinal remodeling in a rabbit model of retinitis pigmentosa, Retinal Pathoconnectome 1 (RPC1).

Rebecca Pfeiffer, a post-doc in the laboratory presented her work on “Rod Bipolar Cell Networks in Early Retinal Remodeling” as a platform presentation at the ISER 2018 meeting in Belfast, Northern Ireland.

Abstract: Retinal remodeling is a form of negative plasticity that occurs as a consequence of retinal degenerative diseases. Part of retinal remodeling involves anomalous sprouting of processes, termed neurites. The synaptic structures and partners of the neurites are not yet defined, leading to uncertainty about the consistency of network motifs between healthy and degenerate retina. Our goal is to map out the identities and network relationships of bipolar cell networks using a connectomics strategy. Retinal connectomes or ultrastructural maps of neuronal connectivity have substantially contributed to our understanding of retinal network topology, providing ground truth against which pathological network topologies can be evaluated. We have generated the first pathoconnectome (RPC1), or connectome of pathological tissues, of early retinal remodeling at 2nm/pixel, and are currently investigating the impact of remodeling on network architecture.
The tissue for RPC1 was obtained from a 10mo transgenic P347L rabbit model of autosomal dominant retinitis pigmentosa. Tissue was fixed in mixed aldehydes, osmicated, dehydrated, embedded in epon resin, and sectioned at 70nm. Serial sections were placed on grids, stained, and imaged using a JEOL JEM-1400 TEM using SerialEM software. Every 30th section was reserved for computational molecular phenotyping (CMP), and probed for small molecules: glutamate, glutamine, glycine, GABA, taurine, glutathione; or TEM compatible proteins GFAP and GS. The pathoconnectome volume is explored and annotated using the Viking software suite.
RPC1 was selected as an example of early retinal remodeling, demonstrating Muller cell hypertrophy, metabolic dysregulation, and degeneration of rod outer segments, indicating phase 1 remodeling and neuronal sprouting. We have observed the presence of both cone pedicles and rod spherules within the OPL to be synaptically active with neurites from some rod bipolar cells forming functional synapses with both rod spherules and cone pedicles. These rod bipolar cells also exhibit structurally altered ribbon synapses. We are currently evaluating network motifs and comparing them to networks established from our previous connectome, RC1, generated from a healthy rabbit.
These findings allow us to evaluate and analyze the impact of retinal remodeling on retinal networks which may have important implications for therapeutic interventions being developed which rely on inner retina network integrity.